Happy Anniversary, Baptists! It’s our Quad-Centennial. Baptists are now 400 years old. This past week Baptists from around the world gathered in Amsterdam to recognize our founding as a distinct religious movement in 1609. With funds provided by a wealthy member named Thomas Helwys (1550-1616), pastor John Smyth (1554-1612) and other believers had traveled to the Netherlands to seek out spiritual counsel. Out of their discussions a statement of beliefs was formulated, and the small band participated in a Believer’s Baptism ceremony. They quickly moved back to England and established a Baptist church.

They declared four tenants: Priesthood of all Believers (also known as Soul Competency)—people are free to act and live according to their own conscience before God. Each believer has full access to God without any human mediator. Believer’s Baptism—opposing infant baptism, baptism is to follow a person’s confession of faith and sins. Church Autonomy—each congregation is to follow its own understanding of Scripture and God’s direction without coercion from other religious leaders or groups. Religious Liberty—the king should not direct the affairs of any religion, favor any particular religions, or tax people to support or punish any religious person or group. It is the right of every individual to worship God, or not, as his or her conscience allows.

The Midwest Regional Meeting of the New Baptist Covenant in Norman, Oklahoma, is our closest opportunity to participate in the 400th anniversary celebrations. Consider going over August 6 and/or 7 to join with the hundreds of other Baptists emphasizing all of the things Baptists can do best together. I have been serving on the Steering Committee for this event, and an amazing program is being offered. Former President Jimmy Carter will be speaking at the Friday afternoon session, August 7. The event is being held in the new Embassy Suites Convention Center in Norman, Oklahoma.

Keep healthy. Pray mightily. Enjoy your life today. Celebrate your faith. And let’s experience the love and power of God together.

A Theology of Moon Walking

I was part of a dozen or so gathered in the second floor TV room of the men’s dormitory at Southwestern Baptist Theological Seminary in Ft. Worth, Texas. We watched the slightly fuzzy images of the Apollo 11 Lunar Lander Module in total silence. This was not just an historic occasion in the making; it was also filled with intense danger. Would they crash-land? Would they sink into a heavy moon dust? Could a man really walk around on the moon in a space suit? Would they be able to lift back off the moon, dock with the capsule and return to Earth safely? Would President Kennedy’s dream for the decade be fulfilled? Then we heard the words, “The Eagle has landed.”

By now you have seen the replay of Walter Cronkite removing his glasses and saying, “Oh boy!” You may have even seen some of the enhanced video of that “One small step…” I knew a man who sincerely believed that it was all a Hollywood trick, done with fancy camera work and special effects. He was a man who did not believe anyone was ever supposed to be on the moon. His was a theological position, not a scientific position on the matter. It was sometime after the near disaster of Apollo 13 that he admitted that real people were going into outer space and landing on the moon. Some still hold that it was all a hoax.

What is your theological position on moon walking? (Not the dance step; that’s a different kind of discussion.) Are people meant to explore outer space, walk on the moon or Mars, and work in gravity-free space laboratories? There is even a textual debate about what Neil Armstrong said. He claims he said, “That’s one small step for a man; one giant leap for mankind.” We all heard it differently. Who is right?

The dream of going into outer space and the endless possibilities for people to achieve impossible dreams have been with me since the days of Buck Rogers and Captain Midnight.

The Bible is also filled with the glory of the heavens above starting on the first page. Apparently since the beginning, we have been enthralled with the night sky and dreaming about what it would be like on the moon or to see a star close up. I am probably not going for a walk on the moon like Neil Armstrong or Buzz Aldrin. But that does not prevent me from celebrating the Creator of the universe, imagining a better future, and reaching for impossible goals and dreams. I believe we are created to explore and discover. Some set off to explore the world with camel caravans. Some set off to explore the world in sailing ships. Now some explore the world and beyond.

Keep healthy. Pray mightily. Enjoy your life today. Shoot for the moon. And let’s experience the love and power of God together.

Yesterday it was crocodiles, fireflies, a burning bush and real lizards sometimes staying in their containers. Today I am dealing with crocodiles, plagues and a Pharaoh. Tomorrow it is crocodiles, spoon-billed birds and Passover. Active, excited children are everywhere. Welcome to my week at Vacation Bible School.

Vacation Bible School brings to mind old images of marching around the church with flagpoles and a big Bible, of popsicle stick crafts, songs, Bible stories, and red juice and cookies. Once upon a time at our church VBS was scheduled from 9 to noon and it was two weeks long; or was that two long weeks? In the ’70s, we shortened the VBS to end on Wednesday of the second week with a Parents’ Program that evening. In the ’80s and ’90s, we changed to an evening format, Sunday night through Sunday night. Since the late 1990s, we have offered Bible School Sunday through Friday evenings. Every year VBS is very much the same, yet every year it is completely different. Young lives are impacted, memories of God and church are made, and the workers discover moments of joy and energy, even as their bodies grow tired and weary.

In one classroom, the boys and girls are lost in a dark swamp, being watched by a big crocodile and learning how to trust God. “Fear Not!” is the watchword. In another room, we gather at the fishing dock to sing songs of faith and memorize the Scripture and theme of the day. Elsewhere, the Bible story is acted out with all of the boys and girls participating in the stories of God’s power over fear, Pharaoh, plagues and seeming impassible situations. The crafts are missions related to be given to other boys and girls, as well as theme-related keepsakes. Each night the children are involved in a multimedia presentation of the day’s Bible story. 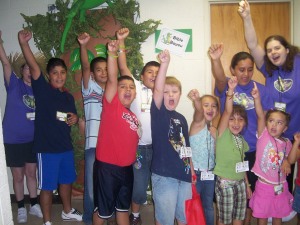 There will always be a place for something like Vacation Bible School, yet the trend seems to be that fewer churches are providing the VBS experience. Some churches are exploring alternative formats like 3-day schools, or 5 Sunday evenings. Others are replacing VBS with sports camps and enrichment programs. Part of the issue is the cost of materials, part is the availability of workers, and part is the full schedules that boys and girls have in the summertime.

Keep healthy. Pray mightily. Enjoy your life today. And let’s experience the love and power of God together. See you later, alligator.

This week Robert S. McNamara, Secretary of Defense from 1961-68, died at age 93.  His passing reminded me of that tumultuous and troubled time in our nation’s life, and my up-close and personal encounter with the draft.

Forty years ago this month I received the famous Draft Notice from the U. S. Army to report to their nearest facility for processing. I had graduated from college and enrolled in seminary, but they wanted me to come see them anyway. After discovering where I was to report and finding a way to get there, I was immediately put on a bus with about 30 other young men and taken to the processing center.

On the ride over one young man stabbed himself  a number of times in the leg with a pocket knife, and  then cut his wrist. This created quite a scene, and he was quickly escorted off the bus as soon as we arrived. He did not want to go into the army. He did not want to die in Vietnam.

Since I was enrolled in seminary but would not start classes for another six weeks, I decided not to apply for the seminary student exemption. I would still face a possible draft upon graduation. So there I was, standing in a long line waiting. First we filled out a detailed military form or two or three. Then we headed to another area and were told to stand in line in our underwear.

I went through the whole process. I even got my own clothes back; some were not so lucky. Finally it came down to the one-on-one review/interview with a weary officer. He said that it looked like I had passed everything with flying colors and that he wanted to welcome me into the army. Then he noticed the long scar on my right forearm. “What’s this?” Two words that forever changed my life. I explained about the car wreck two years earlier, and the surgery to transfer muscles in my hand and arm to compensate for some nerve damage.

To paraphrase the Apostle Paul (Rom. 12:1), I had presented my body as a living sacrifice and the U. S. Army  found it wholly and unacceptable in their sight. They did not classify me 4-F. They classified me 4-Y, which meant I could still be called up if things got more desperate with the war effort.  They never called on me again. I did receive a letter one day about seven years later saying that I was no longer under my military classification.

I wonder sometimes what my life would have been had I gone to Vietnam like so many of my friends and classmates. Would I have even lived through it? That war was awful. In my opinion those veterans still have not been recognized or treated with the dignity and respect each one deserves. Over 58,000 soldiers died, leaving grieving family and friends an empty place at the table. So many were mentally traumatized by the brutality of war, or damaged by disease, drugs and alcohol. We are still reacting to the effects of the Vietnam War even as we fight wars in Iraq and Afghanistan today.

If am a reflecting this way, I believe thousands of men and women who served in our military around the world are thinking about those days. Say “thank you” and give a word of peace to these veterans. Let’s extend grace, loving kindness and even forgiveness today.

“We of the Kennedy and Johnson administrations acted according to what we thought were the principles and traditions of our country. But we were wrong. We were terribly wrong.” —Robert S. McNamara, The Associated Press, 1995.